Image by Adrian Keith via FreeImages

So you’re a budding guitarist with ambitions to be the next Keith Richards? Once you’ve invested in some sweet strings, you’ll probably look for the right amp to blast your music out into the world, and that’s where you’ll encounter the complicated question of distortion.

All amps do have distortion, essentially. Many amps come with a distortion dial or setting that allows the user to create a distorted sound without damaging the amp. Amps that don’t have this setting will produce a distorted sound if the volume is turned up beyond the amp’s designed capacity, but this should be avoided as it can cause permanent damage.

You don’t have to be an electrical engineer to work out how to create the best sound from your guitar and amp. Here, you’ll find everything you need to know about amp distortion.

Running a Google search of the words “amp” and “distortion” will take you down a rabbit hole of highly technical explanations.

Understanding how amplifiers work requires some in-depth knowledge of voltage, current, and power supply.  Your head is probably already buzzing!

But don’t worry, you don’t need to get too technical to gain a working understanding of what amp distortion is, when you want it, when you don’t, and how to create it.

What is an Amplifier?

An amplifier is an electronic device that increases one element of a signal without affecting the signal’s other characteristics (source).

In musical terms, this means increasing the volume of a sound without changing the quality of that sound — for example, the pitch.

The Birth of the Electric Orchestra

The invention of amplifiers revolutionized musical instruments. An amplifier increases natural volume electronically many times over, allowing the sound to be heard in much larger, more crowded spaces than ever before.

This was the birth of the big band era and of today’s massive concerts.

When an electric instrument is electronically amplified, the sound produced by, for example, plucking the strings of a guitar, is converted into an electronic signal.

The electronic signal is then played through a loudspeaker, which converts it back into sound, at a much higher volume.

Many inventors experimented with the electronic amplification of musical instruments from the early 20th century, but the most popular electrical instrument, the electric guitar, was invented in the 1930s.

With it came amp distortion and the birth of a whole new musical era.

Distortion is a general word that describes any warping or deformation of the clean chords that your instrument “should” play.

This sounds like a bad thing and, in some cases, it is. Aficionados would wince to hear Beethoven’s Fifth played with the growling, fuzzy overtones of a rock song.

But some musical genres are characterized by the sound of distortion. Consider the gritty guitar solos of Nirvana’s “Smells like teen spirit” or the wailing chords of Led Zeppelin’s “Stairway to heaven.”

Since the arrival of electric guitars, many musicians have deliberately incorporated distortion into their music, lending it that distinctive sound, which is often described as warm, rasping, or even dirty.

Distortion is, first and foremost, a side effect of pushing an amp beyond its capacity. This can be most easily achieved by turning the volume (or gain) of the amp up beyond the limit it is designed to bear.

Doing this causes parts of the audio signal to be lost, or “clipped,” which leads to the distorted sound.

Ramping an amp to its maximum volume is called overdrive, and can cause permanent damage to the amp.

Many early electric guitarists deliberately used overdrive or capitalized on slightly damaged amps to achieve the warm, gritty tones that we associate with blues and rock music.

Today, the distorted sound of a damaged or overdriven amp is often deliberately created without harming expensive equipment.

Many musicians use pedals that add different sound effects or edit the music in post-production to get the desired overtones.

How to Create and Control Amp Distortion

So now that you know what distortion is and how it’s caused, what can you do to create and control it? The first question is what kind of sound you really want to get from your amp, and this comes down to what kind of musician you are.

Distortion does not play well with “gentler” music like ballads and classical guitar, so if those are your chosen genres, you’ll probably do everything you can to avoid distortion.

Preventing distortion is relatively easy given that modern amps are actually designed to replicate and amplify sound faithfully and cleanly.

Still, as we’ve seen, distortion is a characteristic element of rock and metal, so if that’s where your ambitions lie, you’ll need to master it. Just remember that no amount of screaming feedback will make up for poor playing; practice is still a necessity.

The world’s first amps were vacuum tube amps. Without getting too technical, these amps contained glass tubes in which electrodes were contained in a vacuum.

From around the 1960s, solid-state amps were developed containing transistors and diodes and began to replace the tube amps, although both are still available.

In response, many companies make hybrids or solid-state amps that claim to emulate the sound of a tube amp. To learn more about solid-state amps, read “How Long do Solid State Amps Last?”

Tube amps usually have to be played at high volume to create distortion. Still, it is relatively easy to create that distortion because tube amps begin to distort at a much lower volume than most newer solid-state amps (source).

While it is also possible to create distortion by maximizing the volume on a solid-state amp, there are other ways to achieve the desired effect.

When it comes to choosing an amp as an amateur musician, it might boil down to what you can afford. But don’t despair — chances are you can create the sound you want with a little practice.

Many amps are deliberately designed to allow you to create distortion without merely turning up the volume full-blast, which can be impractical if you’re practicing in your garage.

If there is a knob marked “gain,” “overdrive,” or “distortion” on your amp, this is what you can use to create a distortion effect. By simultaneously lowering the “volume” knob, you can achieve the sound you want without blowing out the windows.

Some amps also have a preamplifier, which strengthens the signal enough for it to feed into the main amplifier. Turning up the “preamp” can help create additional distortion.

Varying the levels on the other settings on your amp, like drive, bass, mid, and treble, will create different tones and colors in your music and help you achieve the effect you want, whether it’s metal, rock or blues. Don’t be afraid to play around until you hear something you like.

Many newer amps come with built-in effects combinations and also have the ability to save various combinations of settings, which can help you learn what works for you and replicate it.

For more detail on how to create different kinds of distortion effects, read “How Do I Make My Amp Distorted Heavy?”

Modern transistor amps have been designed to eliminate a lot of the distortion of older tube amp designs. This means that without dedicated settings to create distortion, it can be harder to achieve.

Of course, you can still create distortion by turning the volume of your amp up to its maximum.

However, this is a quick, cheap way to create distortion that likely won’t sound all that great and will probably damage your amp — not to mention alienating the neighbors.

A better bet for you is to create as clean a sound as possible coming from your amp and to create your distortion elsewhere in your setup. You can invest in a single distortion pedal or stacking different effects pedals together.

As you learn to master your electric guitar, chances are you’ll want to experiment with creating distortion and other effects, and you’ll have lots of fun doing so.

But while all amps can create distortion, it’s best to avoid damaging your amp or getting yourself into trouble with your housemates by simply cranking up the volume to the max.

The bottom line is that a million blog posts won’t teach you everything there is to know about your guitar and the music you can make with it. The best thing you can do is get playing and enjoy the experiment. 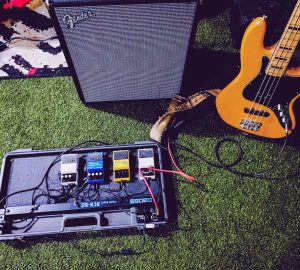